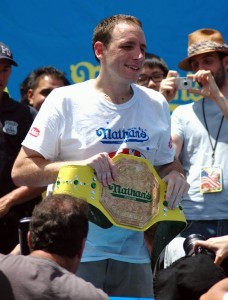 Joey ChestnutFor the second year in a row, American competitive eater Joey Chestnut defeated his Japanese rival Takeru Kobayashi at the annual Nathan’s Hot Dog Eating Contest in New York City, after a tie forced a five-hot-dog eat-off to be held.
After ten minutes of hot dog eating, two shorter than in previous years, Chestnut and Kobayashi were tied at 59 frankfurters. But after the rare tiebreaker, 24-year-old Chestnut emerged as the winner, claiming a $10,000 prize and a mustard-yellow belt. « It was crazy, » he said. « I’m just a normal guy eating hot dogs on the Fourth. You can’t overcomplicate it. »
Kobayashi, whose loss last year shattered a six-year winning streak, said that a sore jaw and a tooth problem may have altered his performance. « If I put one more mouthful in, I could have won », the 30-year-old Nagano native said through a translator. « I lost because I wasn’t quick enough in the rematch. »
This year, the 22 competitors were under a 10-minute time limit, unlike the 12 minutes used for previous contests. The reason for this, according to Nathan’s, was the discovery of a document from 1916, which revealed that the original competition was 10 minutes long.
Thousands gathered at Coney Island to watch the annual event, which has become one of the more colorful traditions of America’s Independence Day.
EnglishLearner.com uses cookies for a better user experience.