Complete the article by choosing the correct word from the four options, below the text. Click on the button « Next » to continue. 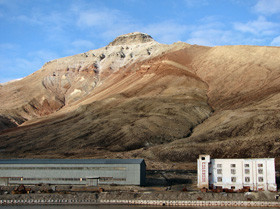 Pyramiden is an abandoned Russian settlement and coal mining community on the archipelago of Svalbard, Norway. It was founded by Sweden in 1910 and sold to the Soviet Union in 1927. Pyramiden lies at the foot of the Billefjorden on the island of Spitsbergen and is named for the pyramid-shaped mountain (1)_____ to the town.
The settlement once had a population of over 1,000 inhabitants, but was abandoned in 1998 by its owner, the state-owned Russian company Arktikugol Trust, turning it into a ghost town. Within the buildings, things remain largely as they were when the settlement was abandoned in a hurry.
There are no (2)_____ on visiting Pyramiden, but visitors may not enter any buildings without permission, even if the doors are open, due to the health and safety (3)_____ involved. While most buildings are now locked, breaking into the buildings, vandalism and theft have become a serious (4)_____ to Pyramiden.
The nearest settlements are Svalbard’s capital, Longyearbyen, some 50 km to the south; Barentsburg, approximately 100 km south-west, and the small research community of Ny-Ålesund, 100 km to the west. Pyramiden is (5)_____ by boat or snowmobile, and guided tours are available in Russian, Norwegian, and English.
A recent episode of the History Channel programme « Life After People » (6)_____ Pyramiden, which predicted that due to the low rate of decay in a frigid climate, the abandoned town’s major buildings would be (7)_____ 500 years from now.
The world’s northernmost grand piano is (8)_____ at Pyramiden, in the auditorium of the cultural centre.
Pyramiden is currently being re-developed by Russia to accommodate tourists. 5-6 people are currently stationed there to upgrade the (9)_____, including the Pyramiden hotel. At the moment there is a small hotel made of old shipping containers that can (10)_____ a small number of visitors.
EnglishLearner.com uses cookies for a better user experience.